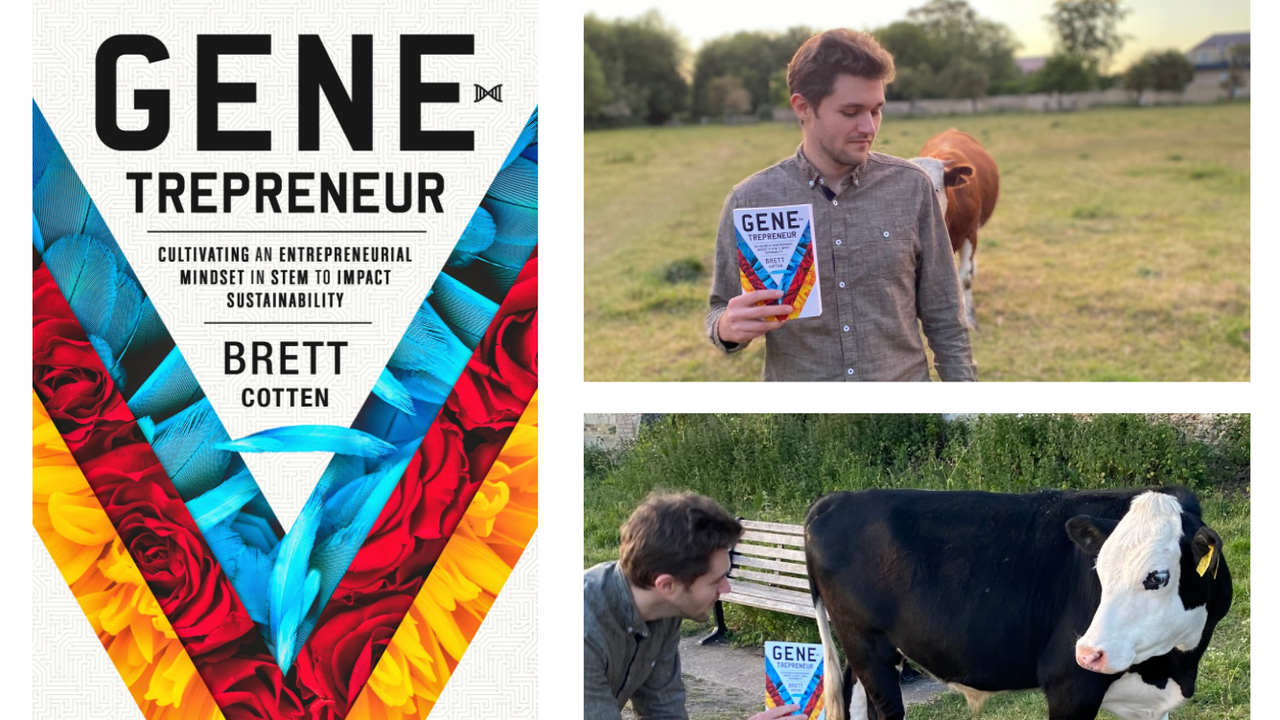 This article was written by and contributed by Gene-trepreneur author Brett Cotten. At the end of the article, you will find free links to download the preface and intro as PDFs. Note: opinions expressed by CellAgri contributors are their own.

Just over a year ago, I published my first book called Gene-trepreneur.

In the book, I featured interviews with inspiring founders who are combining biotechnology and the entrepreneurial mindset to achieve sustainable impacts across food, materials, species conservation, and beyond. I called these individuals and those like them ‘gene-trepreneurs’, and I seek to catalyze the creation of more by sharing their stories.

Through featuring startup founders in Gene-trepreneur, the book highlights both their personal entrepreneurial journeys–successes and challenges they faced–as well as the impacts of the technologies and products being developed by their companies. There are takeaway lessons at the end of each sub-section and chapter, as well as an overarching seven lessons for future gene-trepreneurs to learn from and implement into building their impactful ventures.

Mixed in with all of these stories on alternative proteins replacing factory farming, reviving the extinct passenger pigeon to the skies of North America, and spinning out spider silk from microbes for example, are approachable references like Death Stars for fish from Star Wars, vegan Fight Club, and many more (i.e. Game of Thrones, Meet the Fockers, Marvel movies, Lord of the Rings, Willy Wonka, Jurassic Park, the list goes on). I believe that if we want more people from all backgrounds to support and join in the change that it should begin with making these topics relatable, right?

In this article, I thought it would be nice to touch upon a few of these featured gene-trepreneurs’ progress since the book’s publishing. 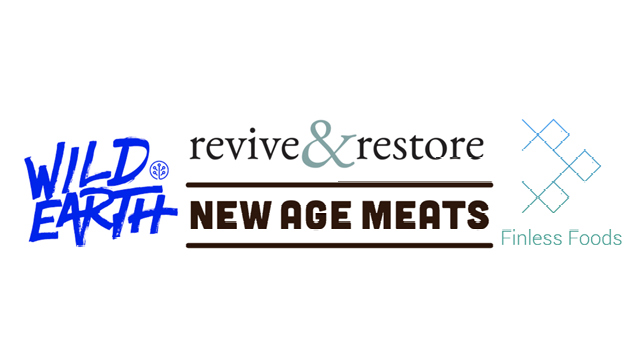 Below are brief updates regarding three of the alternative protein companies featured in the book, as well as one impactful NGO accomplishing ‘genetic rescue’ for endangered and extinct species.

Wild Earth, a well-known name to many in food innovation, is an alt protein pet food company utilizing human-grade koji (a type of fungi) to improve the health and environmental impacts of man’s best friend.

Prior to the book publishing, Ryan Bethencourt, Wild Earth’s CEO and co-founder, successfully pitched the company on Shark Tank to bring Mark Cuban on as an investor. The pair did a $550k for 10% equity deal. VegInvest also led Wild Earth’s $11M series A round in mid-2019. Since then, the company has not needed to raise any more capital–perhaps because they have been so successful in the time since!

Following Shark Tank and out-of-the-water sales, Bethencourt has been able to scale up production of Wild Earth’s plant-based dog food and treats. The company launched on Chewy.com, which like many direct-to-consumer (D2C) companies, had a year of explosive growth driven by the need for home delivery of pet food. (Chewy stock roughly tripled in price from Jan 2020 to Jan 2021.)

Wild Earth also launched in India, which will no doubt prove both profitable and impactful if Bethencourt’s company can attract appetites from some of India’s 20M+ pet dogs as well as potentially deploy to NGOs to help some of India’s 35M+ free-roaming dogs (the highest number of strays in any country around the world).

The company also expanded product offerings beyond their koji-based food and peanut butter treats to additional flavors, as well as to pet health supplements. 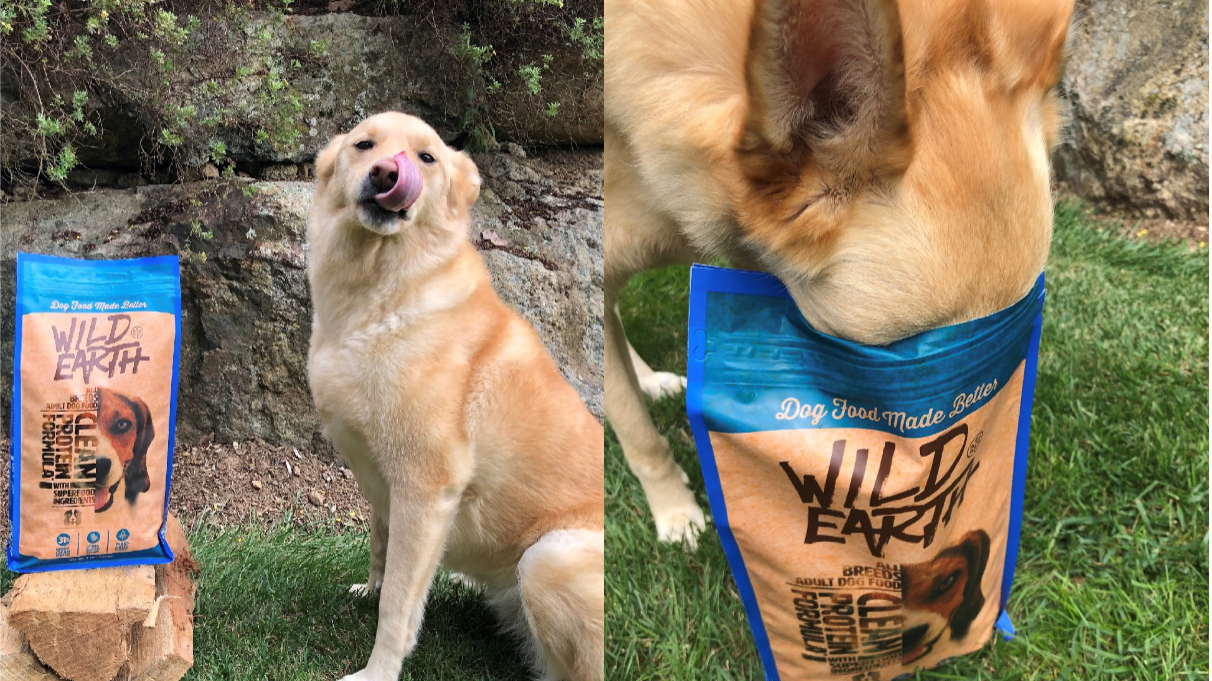 My pup, Kiele, enjoying her first bag of Wild Earth in 2019. She and her big tongue have been loyal customers for over a year now. She loves the food, along with the peanut butter treats–oh so tasty, snoot-lickin’ good.

In the latter half of 2020, Bethencourt and fellow alt protein veteran Mariliss Holm raised a new ‘rolling fund’ via the AngelList platform called Sustainable Food Ventures (SFV). CellAgri reported on SFV in October, and it is the first food-tech rolling fund ever created.

It will be exciting to see which additional promising, early-stage startups SFV selects given that Ryan has a history of knowing how to pick ‘em–he was the first investor in industry-leading cos such as Memphis Meats, Shiok Meats, and Geltor.

New Age Meats, producer of the world’s first cell-based pork sausage, has pivoted their brand slightly since the publishing of Gene-trepreneur. The startup now has more messaging on their site around being a company that serves up blended meats, comprising both cell-based proteins and plant-based ingredients.

While the startup cannot detail much publicly at this time, Brian Spears states he and the company have their heads down hard at work focused on bio, food, and flavor research & engineering.

Additionally since their Gene-trepreneur feature, the New Age Meats team has quadrupled in size, as well as doubled their workspace. 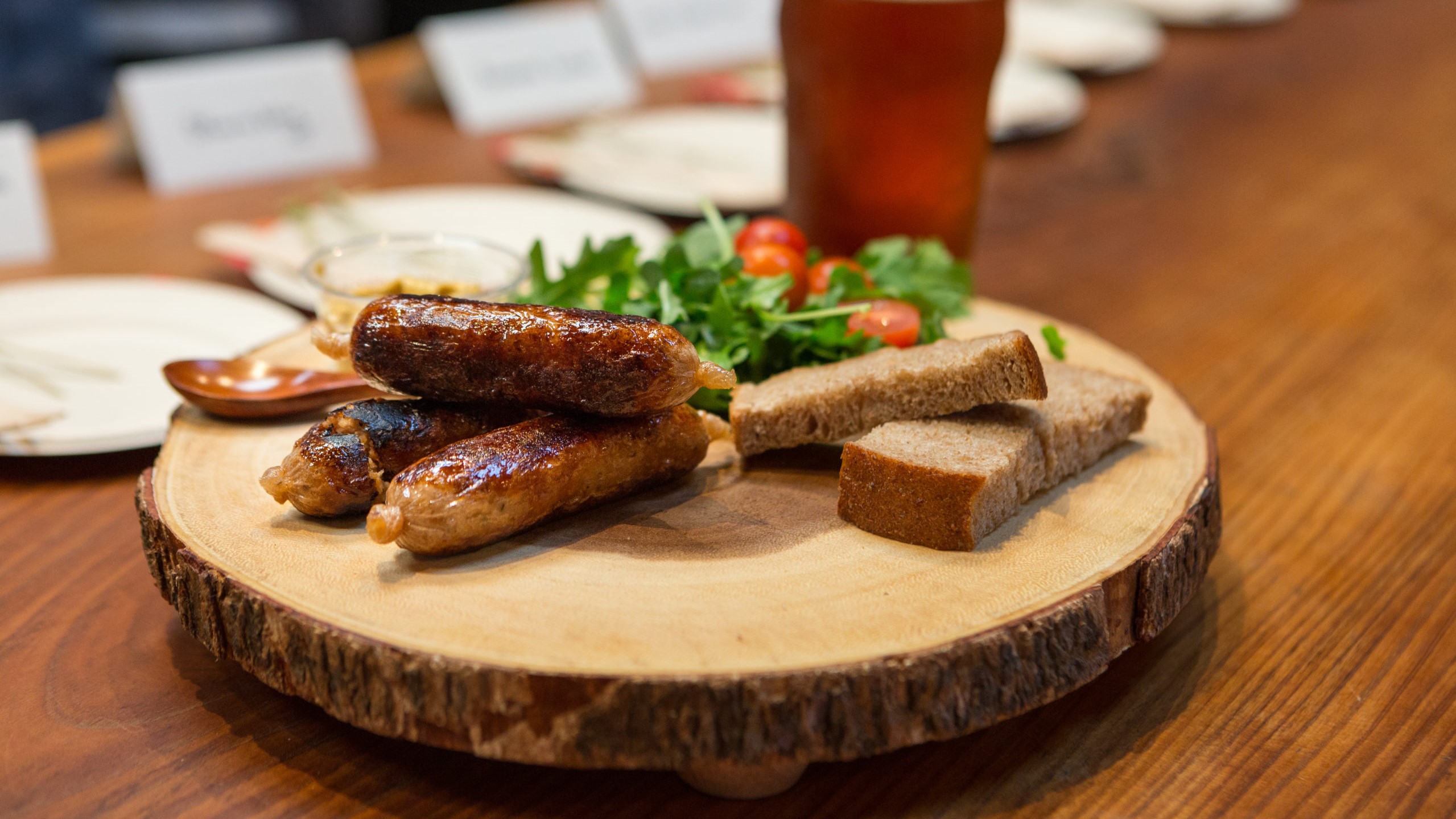 Similarly to New Age Meats, Finless Foods–a cell-based seafood company–also has its head down working diligently at the moment.

While the Finless team is not currently providing public science updates, they are able to share that construction of their new pilot production facility began this past January. The team will be moving into their new facility in May.

Regarding funding, since Gene-trepreneur published, Michael Selden, Finless Foods’ CEO, says the team closed their $10M series A led by At One Ventures. This follows their $3.5M seed from 2018. 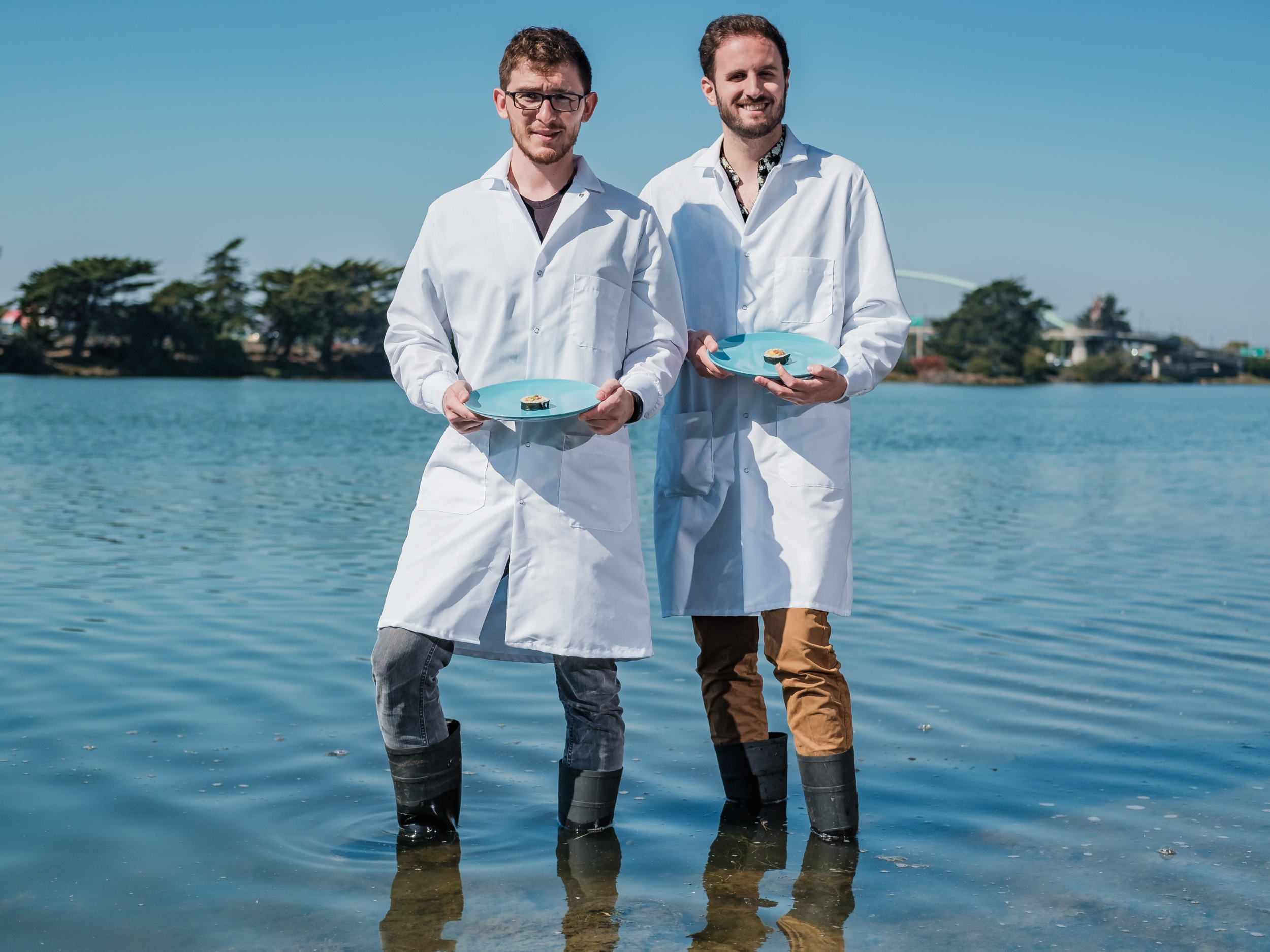 The alt protein community is hopeful for positive announcements in the near future from Finless Foods, especially given the progress of the cell-based seafood space as a whole:

Update on an Impactful NGO

In Gene-trepreneur, we met Ryan Phelan, co-founder and executive director of Revive & Restore–an NGO that uses biotech to propel ‘genetic rescue’ efforts for endangered and extinct species. Some of their work, although not food-specific, overlaps with removing animals as manufacturing technologies.

In the book, the plight of the horseshoe crab was highlighted, wherein millions of horseshoe crabs are harvested every year for the medical industry. Their blue blood has the valuable property of testing vaccines for endotoxin contamination, thereby confirming whether they are safe and sterile to use. 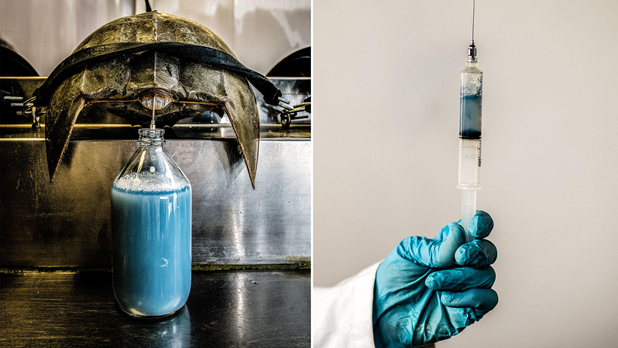 Interestingly, considering how Covid-19 vaccine development will have likely heavily relied on horseshoe crab-derived LAL, there are many questions about how the pandemic and vaccine R&D may have further pressured horseshoe crab populations. Unfortunately, data on catch sizes and stores of LAL are kept confidential, so the effect is unknown.

Happily, Revive & Restore along with the Horseshoe Crab Recovery Coalition have made headway this past year bringing to light that rFC is an effective equivalent to horseshoe crab-derived LAL for endotoxin testing. The European Pharmacopoeia now recognizes the two as such, and work will continue on their US counterpart as well as other organizations leading quality control guidelines in the medical industry worldwide.

Below is a 5-minute video from Revive & Restore about the horseshoe crab.

Revive & Restore has many additional and very exciting initiatives occurring in parallel with their work for the horseshoe crab. More can be found in their 2020 Annual Report and website which include R&R’s progress on:

Most of the companies featured in Gene-trepreneur are expanding. The shift to synthetic biology and biotech for food, materials, conservation, and more is clear in the amount of funding, improving regulatory environments, and adjusting public support going toward these areas.

However, as we know, the world is presently very divided in many respects and navigating all of the stakeholders involved in bringing about a more bio-based future is no easy feat.

Ultimately, I wrote my book to reach and inspire students and young professionals, as they have the potential to be the most numerous and prolific gene-trepreneurs yet! With waves of these individuals emboldened to make their pain points their purpose, they can help culture a more sustainable world into being through biotech and the entrepreneurial, or intrapreneurial, mindset. 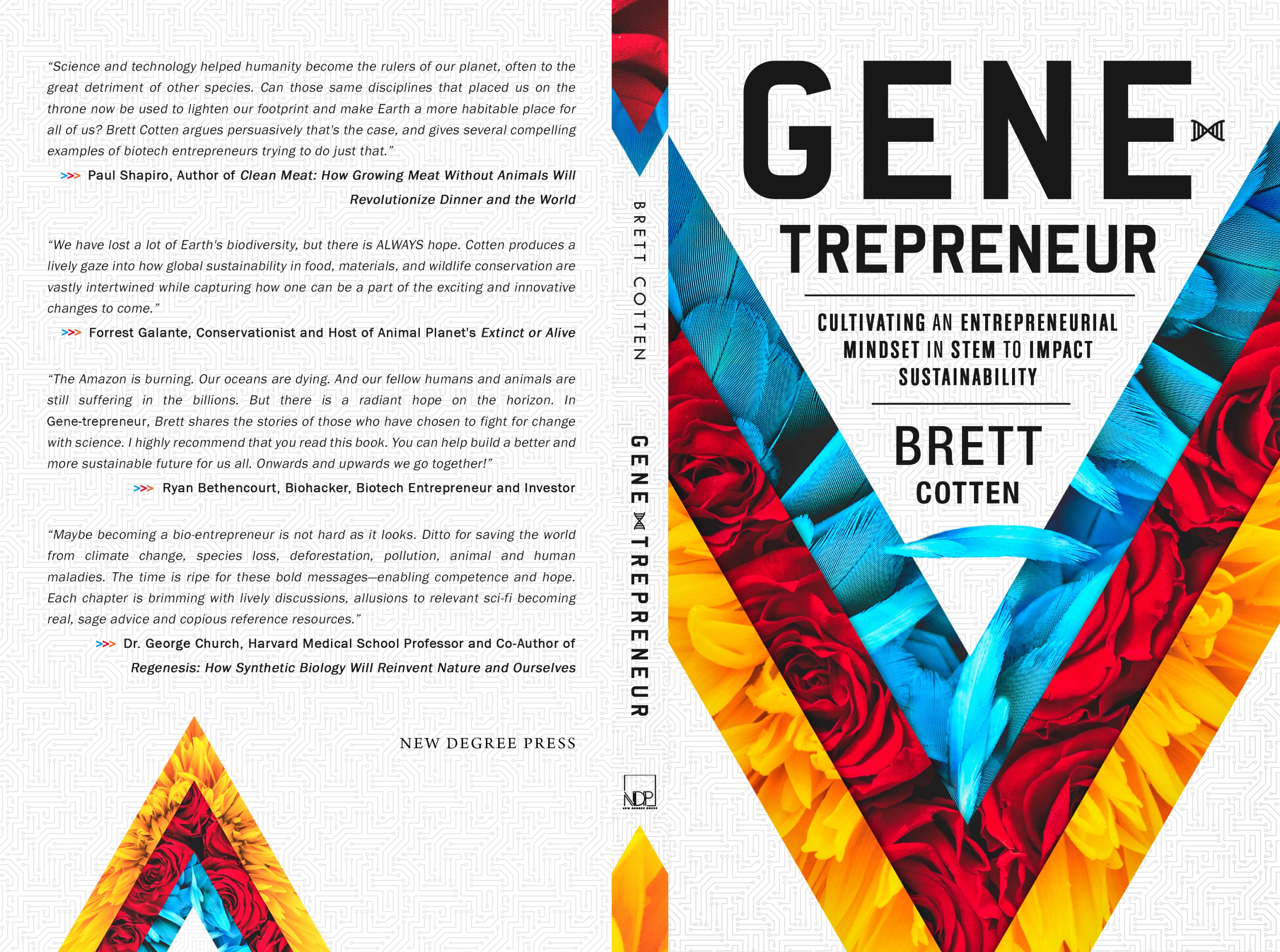 If you are an educator who would like to circulate Gene-trepreneur to your students, I would be happy to share the entire e-Book (or explore paperbacks). After all, students are the future gene-trepreneurs I want to reach most. To this point, I filled Gene-trepreneur with fun ideas, puns, and pop culture references to make biotech topics more relatable and supportable for anyone who might be reading.

Brett is pizza-making, ukulele-playing New Jerseyan currently based out of Cambridge, UK as a venture associate with Counterfactual Ventures. After graduating from Cambridge, he decided to stay for the city’s unique moo-sical cows–see below. He will also be publishing more articles on his Medium page about the book’s writing process, alternative protein, startup accelerators, venture capital, and more.

Gene-trepreneur is available on Amazon where you can find complete copies of the e-book and paperback. For any inquiries, please contact Brett on LinkedIn or preferably by email: [email protected]